Off My Beaten Path in Indy

My husband says I have a fondness for Indianapolis just because I went to college at Butler University. His claim is partially founded; every time I’ve visited since 2008, I’ve met friends on campus, Broad Ripple and the surrounding area. The “Butler Bubble,” as students used to call it. To prove him wrong, during this trip I vowed to stay downtown Indy and focus on up-and-coming areas such as Fountain Square, Fletcher Place and Mass Ave.

I appreciate Downtown Indy’s sustainable evolution over the past 10 years into a network of safe, walkable neighborhoods. This transformation can largely be attributed to the relatively new Indianapolis Cultural Trail (ICT), an eight-mile paved path for bikes and pedestrians that winds through the city and connects art and culinary hot spots.

Circle City has myriad activities for families and epicurean venues for adults. In town for a wedding without the kids, we focused on the latter during our weekend getaway. We chose a quaint Airbnb in the Southeastern neighborhood of Fountain Square, which was walking distance along the ICT to the restaurants and breweries we planned to visit, as well as the wedding (though it was too cold to walk!). The European-style apartment was charming and easy to access. It was the perfect quiet nest for two tired parents in need of some serious sleep.

Fountain Square is still considered a transitional neighborhood; although it seems safe during the day, I would have been nervous to walk back to my Airbnb unit by myself at night. With that said, I’m much more cautious now than I was in my 20’s. If you stay aware of your surroundings, it shouldn’t be a problem!

Historically known as Indy’s theatre district in the first half of the 20th century, it’s no surprise that Fountain Square has evolved into an eclectic, quirky neighborhood that attracts artists and edgy patrons longing for something different.

Colorful row homes and factory-style buildings with late 19th and early 20th century architecture line Fountain Square’s main drag, Virginia Ave., with graffiti art. Across the road from our airbnb was the family-owned organic grocery store Wildwood Market. As we kept walking along the cultural trail toward Fountain Square Brewery, we passed a vinyl records café, Square Cat Vinyl, that serves coffee as well as beer and wine, Nine Lives Cat Café and the historic Fountain Square Theater. Fountain Square is also ideal for a night out, with hot spots such as Imbibe and Hotel Tango (on the cusp of Fletcher Place neighborhood between FS and downtown).

Besides Fountain Square Brewing Co., we spent most of our time dining in Fletcher Place, which is becoming increasingly known for its innovative restaurant scene. Here’s a quick summary of our stops below:

The Wedding: at the Mavris Arts & Events Center

On our first night in Circle City, we were scrambling to check in and get to my fellow Butler Cheerleading alumn Morgan (Mounsey) Smith’s wedding after our five-hour drive from Tennessee. I tried Rent the Runway for the first time and found a gorgeous Badgley Mischka winter floral dress, which was hassle free and easy to send back the next day through the nearest UPS center. Highly recommend for destination weddings!

Thankfully, the venue was a quick five-minute Uber ride toward downtown center in the Mavris Arts & Event Center, a stunning four-story structure built in 1883 with exposed brick and original hardwood floors. Each story was used for a different stage of the wedding – even the outdoor balcony in the frigid temps for a brief military ceremony put on by the groomsmen. As we danced the night away and noshed on champagne cupcakes, vintage-inspired cocktails and local craft beer, guests took in the panoramic vistas of Indy’s downtown lights.

This was the second time I’d been to Milktooth, and it did not disappoint. The hip eatery in Fletcher Place is the ultimate brunch destination. And while it is delicious and the mood is cooler than I could ever aspire to be, prepare for a long wait and a long meal, especially if there are 4+ people in your party (we had 6). We waited one hour and dined for two, which was crazy but worth it. I would recommend ordering family-style with your group so you can try a little bit of everything. With specialty coffee and craft cocktails flowing, my husband and I ordered the latkes with eggs and rosemary (a seasonal item), sourdough pearl sugar waffle, the sorghum glazed bacon and the sourdough sweet potato donuts. Carbs for days! 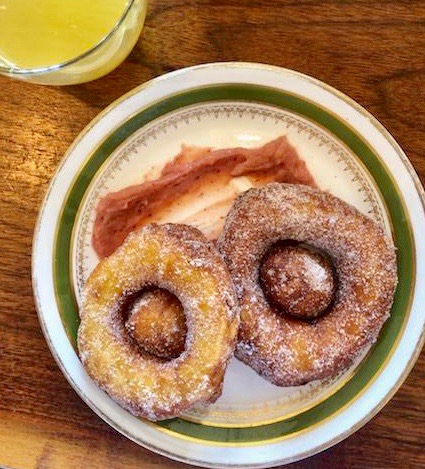 Later that afternoon, we met the wedding party and guests at one of Indy’s many breweries. Open since 2010, TwoDEEP’s atmosphere feels like a cozy living room with a fireplace, farmhouse tables and leather couches but is actually located on major downtown thoroughfare Capitol Avenue.

TwoDEEP’s owner, Andy Meyer, describes it as a malt-forward brewery, which means it creates more malty then hoppy brews. However, their tap list displays a wide range of old world beers, west coast varieties and plenty of experimentation. I’m more of a hoppy beer girl and love hazy IPAs in all of their piney goodness, but TwoDeep’s velvety, colorful ales won my heart, especially in the frigid temps. Some of these rich beers included Red Sunday Irish Cream Ale, Tiramisu Stout and a Brown Sour ale. We’ve been to LOTS of breweries, and I’ve never tried a nut brown sour. It was peculiarly tasty, and certainly not for everyone’s palate.

For dinner, we chose renowned Fletcher Place bistro Bluebeard, nestled in the historic Italian immigrant microneighborhood of Holy Rosary in a 1924 building that was once a warehouse. The intimate restaurant shares space with its sister operation, Amelia’s bread, which is owned within the same family. When you first walk in, it smells of a European-style bakery, has romantic mood lighting and evokes…a trip to an old library (without the musk). Bluebeard was named for a novel by Indy native, famous late author and World War II veteran/POW, Kurt Vonnegut. The décor is a literary enthusiast’s dream, with old typewriters and works by Vonnegut adorning the walls.

The mystique and attention to detail go beyond the interior design. Chef and co-owner Abbi Merriss recently led Bluebeard to become a semifinalist for the 2018 James Beard Award in the Best Chef: Great Lakes Area. After our experience, I can see why! Passionate about farm-to-table produce and working with local farms, Bluebeard’s roasted beet salad was one of the best I’ve ever had, with shaved fennel, basil, shallots, mixed greens, apple, goat cheese and truffle vinaigrette. For the main course, I tried the fish special (I think it was halibut, but I can’t recall, and the menu changes daily), which was equally delicious. When I asked our server for a unique white wine for pairing, she recommended a 2016 Evolúció Furmint from Hungary, which had dry peach and floral notes with balanced acidity to complement the halibut.

Going back to the neighborhood’s roots, Fountain Square Brewing Co. (also open since 2010) considers its taproom a medium for the expression of the surrounding arts community. Colorful local art is strewn throughout the otherwise dark, industrial space with high tops and a few black leather couches. With backgrounds in chemistry and microbiology, the owners are literally experts at the science of beer and focus on quality and consistency. They don’t discriminate in the type of beer they produce, and this shows through their inventive tap list. We tried a six-pour flight of their traditional beers as well as a few seasonals, which proved to be a well-rounded palate.

We were rushed on Sunday morning and in search of a quick breakfast. The goal was to visit Calvin Fletcher’s Coffee Company, but they are sadly closed on Sundays. So, we swung by Mass Ave. for some coffee and souvenir chocolates at Best Chocolate in Town, followed by an early lunch at Indy staple, Yats cajun creole restaurant. When I was in college, Mass Ave. was a trendy, prominently gay neighborhood (which was awesome!), but has since evolved into THE place to go out for young professionals according to local friends. I’d love to delve more into that scene on the next visit!

Bring the Kids to the Bayou!